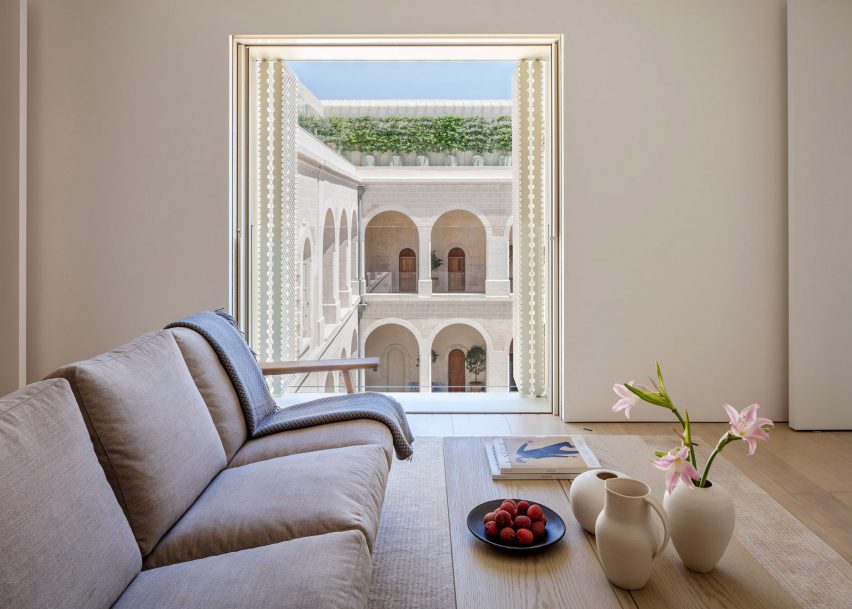 British minimalist John Pawson has fitted-out the interiors of a collection of apartments with oak and minimal decor for the Jaffa Hotel that he designed in Tel Aviv, Israel.

The Jaffa Residences are part of a luxury hotel in a 19th-century French hospital and cathedral in Jaffa, in the south of Tel Aviv.

Ranging in size from studios to three-bedroom apartments, the 30 residences were designed by Pawson in collaboration with local architect Ramy Gill – who also collaborated on hotel.

“Pawson and Gill spent over a decade on the meticulous restoration and renovation process which sought to maintain the original raw, untouched surfaces,” said the project description.

“The duo worked together to create a space in which the old and new seamlessly blend together.”

The residences are located inside the newly built wing of the Jaffa Hotel, and feature sliding glass doors joined by perforated metal screens across the exterior.

The screen takes cues from Middle Eastern mashrabiya (oriel windows) and adds privacy and reduces solar gain, while creating shadows as the sun passed across them, inside.

Most of the residences have views of the former hospital and courtyard, while others have views of the Mediterranean Sea. The units differ from some of the hotel’s very contemporary suites in their more Scandinavian yet still minimal design.

The rooms have 30 centimetre wide, bleached white oak planks floors, white walls and plenty of built-in storage. Kitchen cabinetry and countertops, storage closets, and doors are all painted white to blend in with the walls, and are flush in design.

lmost all of the furnishings are made of oak to match the floors, and midcentury Getama couches designed by Danish modernist Hans Wegner with pale cushions. The bedrooms have large, lightwood beds with integrating side tables, light fixtures and outlets within the frames.

Continuing the seamless, minimal effect, the units have a predominantly cream-and-white colour palette. Pops of caramel leather on chairs and large photographs on the walls by Israeli artist Tal Shochat, break up the aesthetic.

Bathrooms have thick countertops of travertine stone, designed to relate to the native sandstone found throughout Jaffa.

Each of the residences is accessed by a dimly lit hallway clad in dark wood. Internal doors separate the apartments from hotel suites, characterised by lighter wood walls.

Residents may enter via a separate, private entrance in the rear, or from the main hotel lobby. All of the residences have access to the amenities and services at The Jaffa Hotel.

The Jaffa Hotel and Residences are owned by Aby Rosen, co-founder of hotel and real estate company RFR Holding. “Jaffa has undergone a fantastic transformation, with the property market blossoming and an increased demand for luxury residentials,” said Rosen. “We put a lot of effort into making this project unique to the location.”

Also currently underway at the Jaffa Hotel is a 1,500-square-metre penthouse with a private rooftop designed by Israeli architecture firm Pitsou Kedem.

Pitsou Kedem previously designed another residence in the historic port city called Jaffa House, which has exposed vaulted ceilings so common there.

Pawson was recently recognised as a Commander of the Order of the British Empire (CBE) in Queen Elizabeth II’s New Year’s Honours list 2019.

Photography is by Amit Geron.